We recently migrated our data warehouse at Omio from AWS Redshift to Google BigQuery.

My team recently migrated our data warehouse at Omio from AWS Redshift to Google BigQuery.

There were several compelling reasons.

Our data pipelines have grown significantly in the last few years. But this has also created an unwanted amount of legacy code through our data infrastructure. Attempting a warehouse migration in this environment was tricky because

Challenges notwithstanding, we were able to successfully complete the migration in two months. The remainder of this post describes our approach and learnings in detail.

We decided that a key step in this process was to first move all the tables from Redshift to BigQuery in order to allow our end users to migrate their downstream jobs/queries seamlessly.

One of our engineering teams had earlier built an excellent tool in Golang called Blueshift to create incremental replicas of tables from Redshift to BigQuery. Blueshift takes a yaml configuration file with details of the source and destination tables and triggers a Google DataFlow job to copy data. Blueshift also watermarks the data it has copied - this enables it to copy data incrementally in subsequent runs.

Since there were 100s of tables to be copied, we wrote another small Python tool called Shifty to automate the generation of Blueshift config files for all our tables. The copy jobs were orchestrated in Apache Airflow each morning when the latest data got updated in Redshift.This approach allowed us to make all the tables available in BigQuery even though our batch jobs were still running on Redshift.

This is where the fun began. To migrate the batch jobs, we needed to port the SQL code from Redshift to BigQuery. This sounds easy but there are several differences between the SQL syntax and functions supported by Redshift and BigQuery. So each query needed to be carefully rewritten without breaking anything or introducing bugs.

Let’s imagine a simple batch process with 2 transformation steps, SQL-1 and SQL-2. SQL-1 reads Table-1 and Table-2, transforms and writes the output to Table-3. The next step, SQL-2 then reads from Table-3, Table-4 and Table-5 and produces Table-6 as the final result².

If you look closely, this pipeline can be interpreted as a chain of two functions

Migrating each transformation step in isolation

For the first transformation step, SQL-1, we can proceed to rewrite it in BigQuery by reading its inputs, Table-1 and Table-2 from Production schema (which are copies of Redshift tables. See Step-1) and writing to a Development schema.

If the new output (Dev.Table-3) exactly matches it’s Redshift cousin (Prod.Table-3), then we can be confident that our migrated code in SQL-1 is working fine. This is exactly the idea behind characterization test as proposed by Michael Feathers and others as a way to safely change legacy code. 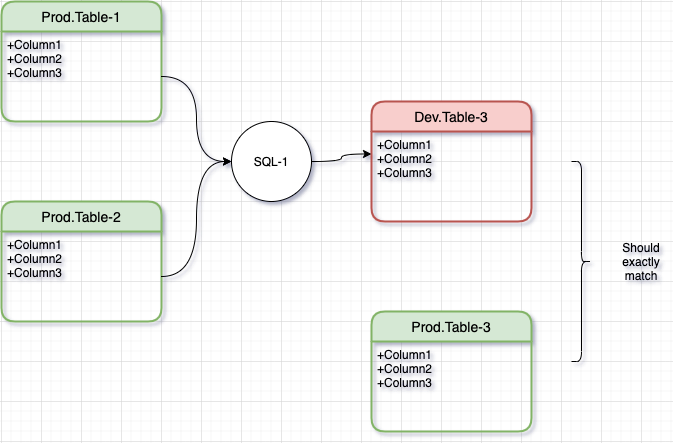 We decided to strictly adopt a lift and shift strategy in order to minimize the vector of change. This meant that we avoided the urge to refactor or optimize the SQL logic even in cases where we suspected it to be redundant or unoptimized. It was important that we focussed on one problem at a time.

Likewise, for the next step in the pipeline 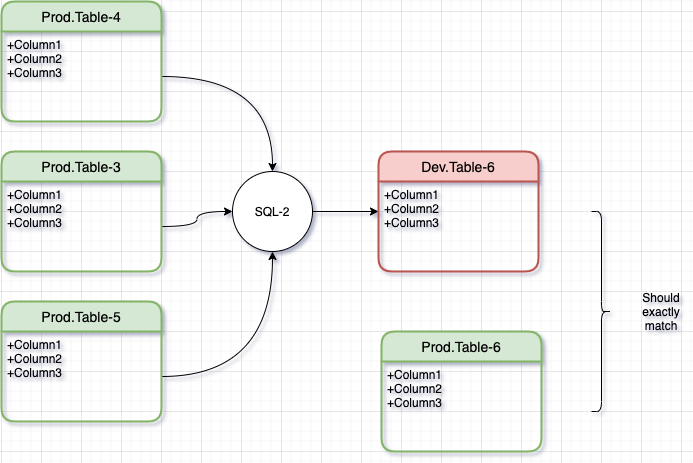 Notice here that for this step, Table3 is read-only and therefore we use Prod.Table3 and not Dev.Table-3. This is key in isolating these transformation steps so they can be unit tested.

By isolating the 2 steps this way, both can be developed and tested in parallel.

Once the individual SQLs are unit-tested, it’s time to integrate them. Here, we connect them as follows

Notice again that this time, we are now using Dev.Table-3 as input to SQL-2. The final output of Dev.Table-6 should still be compared with the Prod version to make sure everything looks good.

At this point, if the new data exactly matches the Prod data, we are ready to replace Dev.* tables with Prod.* tables in the pipeline. The migration of this pipeline is complete.

To make sure we didn’t break anything in the migration process, thorough data testing was needed. We wrote a small tool in Python called wasserwaage ( German for a carpenter’s spirit level) which was essentially a wrapper around Python’s excellent datacompy module. This tool helped us compare snapshots of data between Prod and Dev tables and printed even the smallest differences that it found between two datasets.

It was also important to test our migrated pipeline for a certain period of time and continuously compare the output with the baseline. We relied on Redash for this and built a set of dashboards to compare daily aggregated metrics from the new pipelines with the corresponding production values.

Since we had already copied the tables (Step-1), we were able to simply replace these copies with the new versions in production without impacting downstream users³ as soon as an ETL was ready to be deployed. This allowed us to continuously rollout finished ETL jobs whenever they were ready.